Why are governments so poor at actually making the world a better place? What can we learn from that to improve our own thinking?

Governments don’t admit mistakes or learn from them. “Symbolic of their struggle against reality“, as Monty Python would say (1).

It’s more clear of late. Politicians in increasing numbers simply deny what they said earlier, or that facts are “fake news” even though reliable video evidence plainly shows otherwise. What used to be resigning offences – lying to parliament, various financial indiscretions – are now routine. So it’s now easier to see the blatant deceptions for yourself; to be the small boy who first sees that the Emperor has no clothes.

Whatever else you believe about the lamentable state of politics – motivations, greed, or powers behind them – a real symptom of the problem is that politicians can never be wrong. Just listen to a few interviews. Disastrous outcomes can always be ignored, or explained away as ‘just not getting the messaging right’, ‘unlucky events (wars, market forces…) got in the way’, ‘lies’, ‘sabotage by opponents’… or ‘that was in the past, and we need to move on’, or simply by shouting and calling people names, just a repetition of meaningless slogans. The opposition care mainly about getting in to power and just call people names, whatever – because its more important to score political points than to look at what actually works. Let’s assume our politicians genuinely believe somewhere deep down that they’re “right” (or more likely that “there is no right”), and are fully able to explain away to themselves or ignore any facts to the contrary.

That’s a real problem for us all because it makes it impossible to learn if nothing – no “fact” – can show someone that they are wrong. In such a world the only “wrong” is if you lose (and from the American example, losing an election isn’t so black and white either). It means the only “right” that’s left is “might”. So you just need to spend more on propaganda, or lie more and make more promises to get power. If you can’t “learn”, you can only “double down” on your ideology or self belief – even if it’s evidently bankrupting the country. Plenty of evidence for that in history, but easier to see ‘live’ right now. Kim Philby, the spy, when asked how he got away with it at the highest levels for so long gave the simple answer “you just keep denying everything“(2). Works in politics too. And whatever your own idea of good government is, it surely does need to deal with the actual facts. A chess master in the Bronx helped schools overcome bullying by playing the classes at chess, blindfold. It showed the bullies that no matter how they shouted and asserted they were right, they lost – objectively, black and white, no matter how big their ego.

Political judgement – how good is it, how can we know?

When the young philosopher Karl Popper grew up in Vienna between the wars he was working with the psychologist Alfred Adler, and with Marxists. In both cases their theories explained the world and were charismatically compelling. But Popper became uncomfortable precisely because anything that happened at all was explained as fitting their ideologies. Just as we saw above with politics, it dawned on Popper that this was not a strength of those ideologies, but in fact a weakness because we learn nothing from any test or confrontation with reality. But then Popper heard Einstein talk. Einstein’s theory was in many ways more outlandish than either Marx or Adler, but crucially Einstein described an experiment which would test his theory. If that test had a particular outcome it would show decisively that Einstein’s theory was wrong – we would learn something. This difference between Marx and Adler whose theories could explain any conceivable observation, and Einstein, seemed to Popper a revelation. He went on to use it to make a distinction between what was genuinely ‘scientific’ and what was not, and perhaps has been the most influential thinker on what genuine science actually is, and why it succeeds in yielding reliable knowledge about the world. (3) 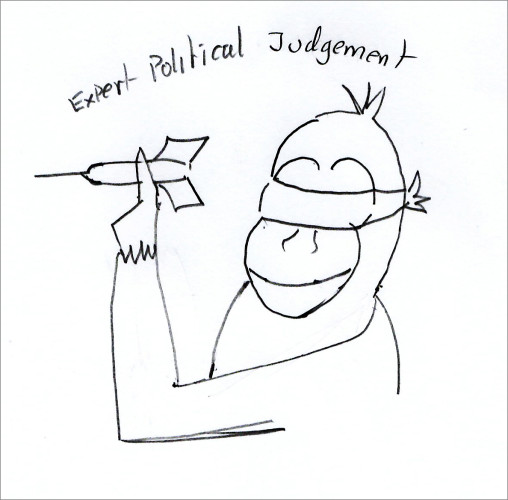 Back to politics. The implication is that ‘ideologies’ are not a wise way of dealing with facts or reality, in part because the future is too complex to fit our simple stories, and so the ideologies cloud judgement. Philip Tetlock tested this. His 20-year experiment asked the highest paid political pundits to make black-and-white predictions of how future events would unfold. He concluded that our best political minds were no better than “dart-throwing-monkeys” when it came to being right about the future. Worse still, the more prestigious the expert, the more likely they were to be wrong. (4)  A strategy of just doubling down on ideological positions is even more closed minded and hence error prone.

We need a bigger boat

Reality is too big a fish for ideological boats to handle. Where can we get a bigger boat? If we could ditch politics(!) we could try a simpler approach: decide what we are trying to achieve, say what the best solutions worth trying seem to be, propose trials from which we can genuinely learn about what works, then actually learn from them, roll it out, and repeat.

You can definitely take issue with ‘science’ as it is practised, largely funded by self-interested corporations as it is, or with Popper. Even so, his insight is valid, and has much to say about the state of wisdom in our government, and its ability to learn anything that will help us. And too we have the problem that populations are apt to vote for “strong” leaders who promise simple answers, and so bear responsibility for the outcomes of those who they support. As Churchill put it on the situation before world war 2 “Thus an administration more disastrous than any in our history saw all its errors and shortcomings acclaimed by the nation…“. We’re all to blame, and perhaps society needs to grow up too, and give up looking for simple answers or fine ideologies.

What we’re looking for is a better starting point. It’s not rocket science, but finding a way to deal with the real facts is better than a politics in which all experiments must fail. If you know what the other parts of the puzzle are, do say. Comment, like and subscribe, or as Douglas Adams presciently put it so many years ago: “Share and Enjoy“. (5)

(1) Quotation from Monty Python’s film  “Life of Brian“, 1979.
(2) Harold Adrian Russell “Kim” Philby British Intelligence Officer and double agent for the soviets:  “Deny everything. My advice to you is to tell all your agents that they are never to confess”
(3) Karl Popper
(4) Philip Tetlock “Expert Political Judgement: How good is it? How can we know?” paperback, 2006
(5) “Share and Enjoy” was the slogan of the Sirius Cybernetics Corporation Complaints Division in Douglas Adams’ “The Hitchhiker’s Guide to the Galaxy“. This phrase had its own song, which was sung by a choir of robots in the radio version. The Sirius Cybernetics Corporation tended to produce inherently faulty goods, which rendered the statement ironic since few people would want to “Share and Enjoy” something that was defective.