Don’t you sometimes feel stuck, going through the motions, overstimulated, but creatively under-nourished? How can we stop, and prevent, ourselves repeating the same loops time and time again, unaware we are not moving forwards, but trapped in outdated habits? What can we do to get out of tedious mental ruts and find fresh perspectives and new ways of doing things, new ideas for living, for a project, for our futures? Our minds seem just great at repetition, but coming up with new ideas and perspectives can be the problem.

Thankfully, there are tools and techniques we can apply deliberately, creative moves we can learn, and become practised at, to help us “rescue the princess”.

At a recent event, during a lull in the proceedings, I became fascinated by the form of a perfectly coiffured ponytail in front of me – enough to want to sketch it.

In considering the resultant drawing, I began to muse on how the form of the ponytail could be used as an analogy for how to address this problem of coming up with “new ideas”.

This seemed to provide an overview, but looking for something more specific to represent the kinds of tools and techniques we can draw on, I remembered, and conjured up, another image of lovely locks which both engaged my imagination, and took my thinking further.

As children, weren’t we enchanted by fairy tales, like the story of the lady locked up in the tower? I know I was. Even the rolling sound of her name R-a-p-u-n-z-e-l  evoked a sense of magic for me. There was a marvellous awe at the image of the princess-like character, denied access to a hairdresser. It was amazing how she had mysteriously grown her sumptuous hair so long and strong that the witch, and then a prince, were able to use it as a rope to scale the tower.

The story strongly conveys for us too, that feeling of entrapment, and stimulates the wish to be released and rescued from it. We share in the sense of  time passing, as the hair grows, the stultifying boredom of repetition, stagnation and enforced passivity with no hope of escape. The long golden plait becomes a symbol for that hope in the possibility of creative change, as the story unfolds.

With a child’s mind weren’t we happy to accept that logic and fairy-tales inhabited very different worlds? Didn’t we readily enter that imaginative mindset which allows for wild possibilities, without the need to evaluate them? We found it easy to suspend disbelief and engage with the creative magic of the story, enjoying that sense of being spellbound to see where it would take us.

As an adult, with the eye of experience, the magic is somewhat qualified, if you find yourself quibbling with the logic of hair growth rates that don’t add up! (…so, if she was 12 when she was walled up, and around 20 when we see her with the long plait.. if hair grows, at, say, 2cm a month on average, that’s 24cm a year…but that’s only 1.92m in 8 years, the tower is much taller….).

If we want to escape from being trapped in our metaphorical towers, its clearly helpful to set that kind of thinking aside, temporarily, and enter the world of possibilities. What spells could we cast to create magical solutions and devise new ideas for “rescuing our prince or princess”?

Once we have decided what it is we want to create new thinking for (our “focus”) and have explored the topic so we understand the background context, there are a number of creative tools we can use to give us the traction we need to come up with ideas. 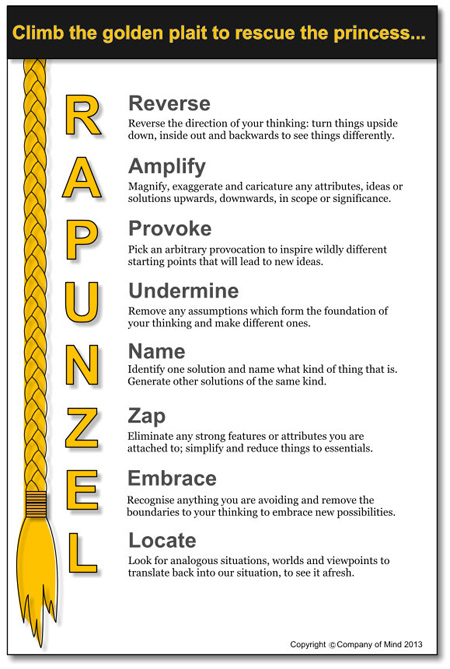 From the creative tools canon, I’ve devised this set of techniques, with the help of the fairy story, and will run through examples of these in use, in a future post.

So, if you find yourself stuck in whatever way, first of all recognise and accept that you are in that state. See if you can then generate a sense of ease and open-mindedness that new ideas are possible.  This can get you going, and you can come up with any obvious ideas that immediately come to mind.  If you need more inspiration, then try out one or two of these RAPUNZEL techniques, and you may find that they help you to liberate more, and more creative moves.