The “Boomerang effect”
That in itself is interesting, as it demonstrates that the by-products of industry are being exported half way across the world. (It makes one wonder where the leaks from Fukushima will end up…but that’s another story). What is pertinent, and somewhat ironic, is that this increase in air pollution has actually been caused by companies in the US. By outsourcing significant manufacturing work to China, they have created, for the smog-beleaguered inhabitants of LA, an (unintended) “boomerang effect”: the consequences of actions we’d previously been able to ignore. It’s evidence of the complex – and measurable – ways in which human societies are becoming inextricably joined up. The inter-relationships across our world have become increasingly obvious.

When we saw the first photograph of “Earthrise” from space we understood for the first time, that we did indeed, all inhabit one world. We had known that already – intellectually – but without feeling the reality of that truth. Just as in March 1926, the first transatlantic telephone call brought the shock of a reality that had previously been just an abstract concept – that whilst it was daylight in London, it really was night time in New York.

Logic Bubbles
As a whole, no-one 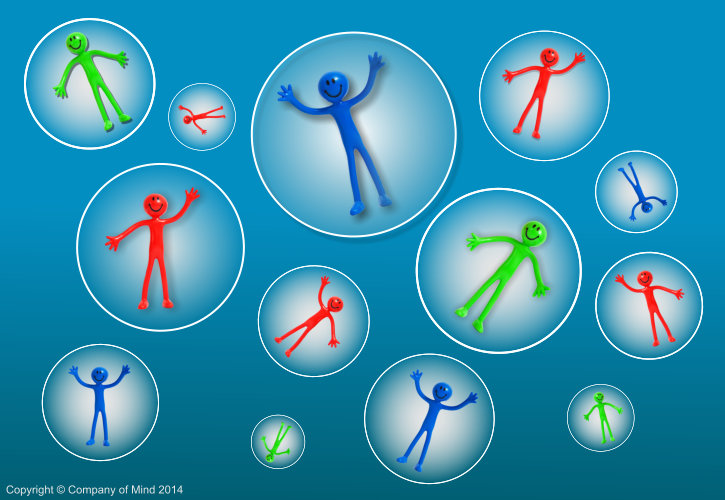 really wants to see an increase in pollution – especially in their own environment. From the viewpoint of any one industry which needs to drive down costs and increase profit, however, outsourcing to the lowest bidder makes complete logical sense, regardless of location. Decisions of this kind are necessarily made within self-contained “logic bubbles” – independently operating systems of value, belief and intent that have a life of their own. (3)  It’s only when we look at the full picture that we see how absurd it is to engage in actions which are clearly detrimental to our own interests as a species living on one planet, where the wind, waves and weather, do not respect political boundaries.

But surely the legacy of Darwin’s work and the “Selfish Gene” tell us that in our lives and businesses we must act out of the logic bubbles of self-interest, in order to win in the struggle for survival of the fittest? That’s the paradigm we’ve pursued since the mid nineteenth century. As we see the ecological consequences of this focus on competing interests come home to roost, however, perhaps that’s becoming a harder argument to sustain. For the ecology of our own thinking, there’s something we can learn from these examples for our Fellowship of Mind.

Integration versus Fragmentation
What does this have to do with how we think? In a very real sense, each of us has a “society” within our heads. We switch our attention between myriad different concerns or topics, and with our limited abilities we get absorbed in each one, forgetting the bigger picture. In this way, we can become fragmented into different logic bubbles and make piecemeal decisions that negatively affect ourselves as a whole. We can, for example, create an artificial distinction between ourselves at “work” and at “play”: becoming adept at compartmentalising, we suppress a capacity for “play” when we’re at work and choose not to engage with what we come to think of as “work” in our leisure time. There may be good reasons for doing this, but even so, we are making divisions within us.

Matthew Crawford (4) says that we create a transaction with ourselves – hours spent at “work” in our jobs, are tolerated as a cost, as we look forward to the longed-for holiday. The holiday experience then acts as food for the soul as we re-enter the desert of work, and yearn for the next holiday oasis. In this way we can become divorced from our true reactions and needs, doing jobs we don’t like or disagree with, telling ourselves we “have to” and it will be alright after the next holiday. This split can leave us feeling like half a person, as the roles and the different personalities that we adopt cause us to feel and act in inauthentic ways. We may have to do these things, but that makes none of the above less true. As Seth Godin so beautifully put it “Instead of wondering when your next vacation is, maybe you should set up a life you don’t need to escape from“.

A Bundle of Selves
This compartmentalising our life into logic bubbles has consequences. If we observe ourselves over time, we realise something significant. We think of ourselves as one person, but we find we are actually a bundle of selves which compete and conflict. We proclaim unexamined views that don’t add up, we take on different roles and identities that obey different laws, have different rules and priorities depending on the people around us and the circumstances we are in. The mistake, in a way, is to think that we are coherent, that we do match up, that all the pieces do fit together – but we are very good at kidding ourselves that we do.

Extraordinary Persons
Working against the tendency to think in more, and ever smaller logic bubbles, for our Fellowship of Mind, we can go in the opposite direction and look for ways to bring things together, to integrate and synthesise.

Just as, when painting a picture, we have to compose all the parts in their proper proportion and shape in relation to each other, so in our mental world, the more we can see how everything relates to a whole, the more we can see and get the parts of ourselves in proper perspective and working in harmony. We can become wiser, stronger, more integrated people, more like the “extraordinary” people we’ve read about or come across who inspire us, whose internal “logic bubbles” have dissolved to create a more unified whole person. This quality of mental wholeness has been identified by Paul Ekman and Richard Davidson in their “Extraordinary Persons” (EP’s) project as a defining quality of people commonly regarded as extraordinary human beings. Specifically this quality of integration leads to “a transparency between their public and private life” (5).

A “State” of Mind
Competition is the model our culture has imbibed – largely in response to Darwin. This has brought some clear benefits to the market place, but for a “society” competition has the drawback that the short term survival concerns of those fighting and winning, overshadow any view of what is best for society as a whole. There may be a limit on how ‘wise’ a society can be because it is made up of individuals, each only dimly aware of what the lives of others are actually like – logic bubbles are built-in. But within our own minds there’s the opportunity, if we wish to take it, to be joined up in our own thinking, to integrate and keep the whole in view. We can do this even whilst switching between all the different things we have to think about, and roles we ‘play’. Coherency is more possible because there really is, for practical purposes, just one organism, one “you” to define how the society of your own mind is governed. To draw the analogy of a corporation, society or government with our mental lives, we could imagine we had a “State” of mind and ask ourselves:

If we want a better world and to build a new reality closer to our Fellowship, the most pressing need we have  is for the better thinking to get us there. We can’t do this with short-term logic bubbles at the expense of longer term goals for the whole. We can, however, start with ourselves:  we could frame a Constitution for our own mind, and perhaps even draw up a Declaration of Independence for our own collective self. Our own culture may have an unerring belief in competition, but within our own minds, we could base our Constitution on co-operation instead. After all, whilst Darwin’s most famous phrase “survival of the fittest” appears only twice in “The Descent of Man“, the word “love” appears ninety five times.

References
(1) Photograph credit: NASA
(2) I the essential daily briefing, 22nd Jan 2014, page 11.  Read a full version of the article in The Independent
(3) Joel Bakan – “The Corporation – The pathological pursuit of profit and power” 2004. Bakan points out that corporations are legally bound to create profit for their shareholders.
(4) Matthew Crawford “The case for working with your hands – why office work feels bad and fixing things feels good”
(5) Described in Daniel Goleman – “Destructive Emotions“. See page 19 and pages 364-365.