I’d like to take a contentious topic, and try to approach it a little more clearly, at least avoiding some of the usual pitfalls that limit our thinking. The topic is “whistle-blowing”. It gets strong reactions and emotions run high, so we’re readily susceptible to all the usual distortions when thinking about it.

Whistle-blowing illuminates how institutions manage information that they fear may damage them if exposed. It is a good topic for us because that is something we all do – reject information we don’t like and don’t want to hear – so it is a ‘thinking’ topic that affects us all.

A Saucerful of Secrets
In this post I’d like to explore whistleblowing as an issue. In later posts I’d want to look at solutions.

A simple definition. By whistle-blowing I mean the following:

Whistle-blowing happens when someone within an organisation makes public, information which the organisation wants to remain hidden.

Today we have a surfeit of examples – which may be a healthy sign: internet monitoring, the NHS, BBC, MPs expenses, the activities of Banks and the Police, the acts of the military, politicians and large corporations. The plain facts revealed by whistle-blowers have been shocking, extraordinary, and salutary – revealed facts that cut through the professional rhetoric which seeks to obscure, deny and shift blame. The revelations are commonly followed not by denial, but apologies, changes of management, promises that it will “never happen again”, that “measures have been put in place…”, “lessons have been learnt”, and usually “that was all in the past” – in short, frank admissions that something was unacceptably wrong, and the failings very real.

Yet prior to the “whistle-blowing”, people within the organisation knew what was going on and chose to ignore or suppress it. All the laws, processes, safeguards, and policies didn’t fix that – so what hope was there for better thinking about those situations (debates in parliament and so on) when key facts were hidden or denied? Only people within the organisation who succeeded in getting incontrovertible evidence and raising an alarm loud enough eventually bought about corrective action, in a situation everyone later agrees was wrong.

Looked at that way whistle-blowing is surely a good thing and we would want to support it. Yet we give whistle-blowers a notoriously difficult time. In some cases they fear for their lives, and in practice get little support from governments, courts and the laws supposedly there to protect them. In other words there are strong forces operating to suppress facts that people in authority don’t want to be heard.

What is it that stops such important facts about institutional failure coming to light? Perhaps it’s obvious, but to help ourselves untangle the thicket of views – not intellectually because that just tends to entrench positions, but by a genuine attempt to perceive an alternative view. Otherwise we run the danger of just saying it’s “wrong” and “shouldn’t happen”, which may be “true, but largely useless”, a kind of denial on our part. If it doesn’t make sense, then reason won’t help us. Instead we need to shift our perception. Let’s take a stakeholder likely to have a different view, but who is not actively corrupt.

You’re in charge of an institution or company. You are responsible for large budgets, and hundreds of jobs depend upon what you do. Your management team tell you you’re doing a great job in trying times. That’s true, so you believe them. If you meet your targets the company will do well, you’ll all get substantial bonuses perhaps enough to set you up for life – you won’t be a Chief Executive for ever. You tell yourself you’re doing it all for the benefit of everyone in the company, though employees don’t seem to appreciate you for it. You’re preoccupied with big international deals and lawyers, that will get you to your targets. A junior keeps whingeing about safety and a few poor figures – they are one of those people who are always complaining about something, and there’s plenty of those. Besides, nothing is ever completely safe and you can’t realistically do anything about it: the cost would bankrupt the company; you’d have to fire a lot of people. Sure, more could always be done, but there are bigger things to worry about than that. Maybe it’s a case for PR to work on. The junior gets caught sending sensitive documents to the press, which get blown out of proportion.

How would you behave towards that junior – honestly? How will their colleagues treat them when their jobs are threatened?

Later, at an inquiry, we’ll be asked why we suppressed information and ignored those facts.

That is pretty much what happened to the Space Shuttle Challenger which exploded just after take-off. This was a culture where those in charge didn’t want to hear bad news – they never said that, but the unspoken signals were strong. So the engineers stopped telling them. The report makes interesting reading (2). In hindsight we’d say management were ‘wrong’. Maybe in other cases where we like the outcome – the olympics? – we’d say exactly the same behaviours by ‘strong’ management were excellent.

The cosy glow of being right
Having tried to see from that viewpoint of those managing an institution, I’d say there is some merit in that position. We need to understand that, because it’s what people in authority are likely to believe. Drew Western at Emory State put American voters into brain scanners and played them speeches from both republicans and democrats (3). His conclusion is that when hearing what we want to hear the brain does very little work, and we feel good. When we hear things we disagree with, the brain goes into overdrive to find ways of dismissing or explaining away disturbing facts, and then we’re back to the cosy glow of being right.

It’s a little sad; perverse really. Reason is supposed to work the other way around. But all our mental skill is deployed not to see more clearly, but to twist reality to fit what we already ‘know’. Perhaps it’s something we’re educated to do, and I think we see it in parliament most days. Jumping to defend our view doesn’t get at truth, at best it tells us who is better at arguing, and just entrenches positions more deeply – like parliament. If you believe welfare is a bad thing, you’ll find ways of proving it, whatever the ‘facts’. It’s one thing we’re trying to remedy by genuinely trying to put ourselves in other’s shoes – the attempt itself changes how we ‘see’.

Collecting parts, and seeing what we have
Those are two viewpoints – whistle-blowing is good because it is needed to unmask dangerous behaviour that needs action for the good of all; and whistle-blowing is bad because ill-informed people with their own grudges can derail our organisational efforts.

If we leave it at that it’s just one side vs. another which seems to get us nowhere, leaving the topic confused. Then whoever shouts loudest or can afford the most legal fees, can scare us the most and wins. Instead let’s try and unpack the picture we’ve painted and see if some wiser outcome is possible. When there are seemingly contradictory perspectives, it may be that distinct points are being mixed up in a single idea, in which case we should try a to separate out the parts:

The first two seem reasonable, and go in one direction. The third goes in another, and needs the most attention because the forces within institutions are so strong. Let’s add in more information. The desire to protect individual self-interests are strong. When fortunes, bonuses, power, jobs and security are at stake we quickly close ranks and have a habit of looking for scapegoats. For those in authority it’s easy to sow fear, uncertainty and doubt, at which point thinking is incapacitated and people fall back on tribal reflexes. 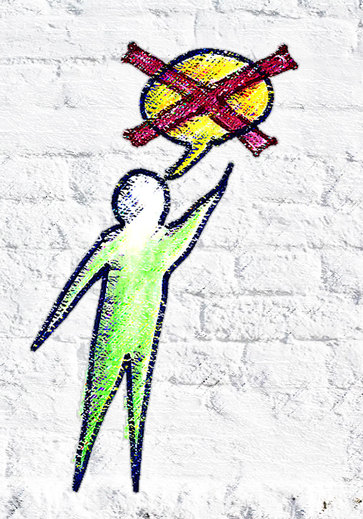 Why we need extra care – our astonishing docility
Self interest of those in authority is very real, but we’re all complicit too, to a surprising degree. The fact we have to face up to is that we’re astonishingly docile and obedient to people with power, authority and titles – whatever we might say in pubs. Recall the Stanley Milgram experiments (4), finding that ordinary people will electrocute another person to death if someone in a white coat tells them to. That work was done after World War II, to understand how the German people could have blindly followed a charismatic leader to commit atrocities. To the disbelief of everyone it turned out that most people, in any country, would do such things if a person in authority tells them to.

Despite the awe-inspiring significance of these findings, little has been done to face up to the results. In appointing bosses, the qualities sought, and the remuneration incentives offered, we strengthen, rather than counter, these behaviours. Combine this unacknowledged obedience to authority with our jobs and security being at stake, and the disapproval of our colleagues and families, and we’d surely expect most employees to toe the line when unsavoury things are being done within an institution. It’s surprising anything ever comes to light if people in positions of authority don’t want it to.

History records few whistle-blowers who benefited from their actions, most professed their reason for doing so, to be that what they saw going on was “wrong” – later generations agreed with them. Most lost a great deal by their actions – it would be interesting to survey cases. Conversely, their colleagues who remained silent kept their jobs and didn’t incur the wrath of authority.

A different stance: The facts are friendly
Why should we care? If we believe better quality thinking is important as a society, then we surely need to be open with the facts, and to support and encourage that openness, and to work against the strong tendencies to hide what is unpleasant. Carl Rogers advised his patients that “the facts are friendly” – to face up to truths may be painful, but is the only path to healing. The same is true for us collectively. You can’t fix appalling institutional behaviour in hospitals if the fact of what’s going on is suppressed. Karl Popper captured the point bluntly by saying the first problem in politics is not what system you choose, but how do you stop those in power from abusing it. If that’s true, then support for those who flag up abuses is the sign of a healthy system, just as suppression of those who dissent is the harbinger of police states.

Sadly policies and laws have not been enough by themselves to make the difference, because authority and hierarchy create an economy of influence which is too strong.

How do we move forward?
At this point I’m comfortable having identified those elements in the topic. What I’d like to do as a next step is look at possible solutions. How do we move forward to more open behaviours in the light of the forces outlined – whilst keeping appropriately private those things which need to be?

The easiest place to start is to look at the “bright spots” – those areas of “positive deviance”, and learn from them. Where to look? Workplaces are one excellent source. They’re good laboratories because you could technically describe them as unelected tyrannies, and so prone to all the problems flesh is heir to: authority, secrecy and self-belief. Like being an employee in a company run by one of the candidates in The Apprentice (6) – they may say they welcome alternative views and are good with people, but do you think you would last long as an employee questioning their decisions? If we can find “bright spots” of successful and genuine openness welcoming dissenting views in that jungle, it’s surely a good place to start learning from.